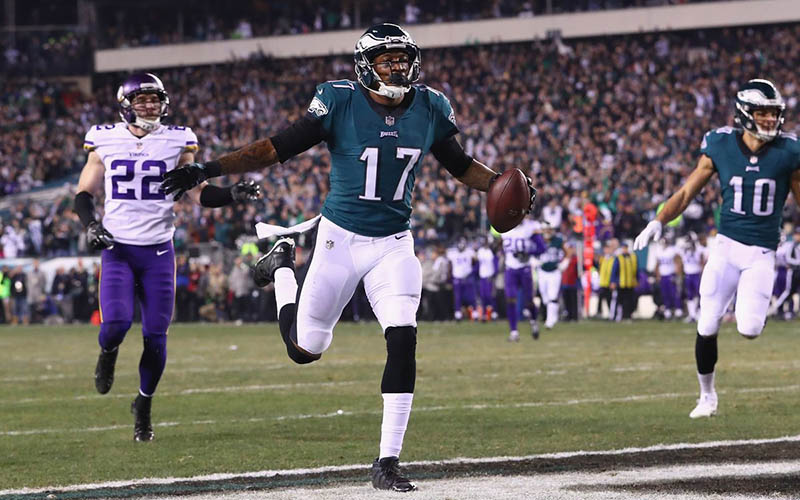 While the rowdy Lincoln Financial Field fans embraced the Philadelphia Eagles’ underdog status Sunday night, the Eagles played like they always believed they were the better team.

Over the course of their 38-7 NFC Championship Game win over the Minnesota Vikings, the Eagles did everything they weren’t supposed to be able to do without injured starting quarterback Carson Wentz — and they forced the Vikings to do almost everything badly.

Offensively, the Eagles were better running the ball, far more effective passing downfield and devastating on third down. Their defense upstaged the Vikings’ vaunted unit and made quarterback Case Keenum look like the undrafted journeyman backup he’d been his entire career.

Through the first two drives, though, the game went mostly by the book: Keenum opened the game with a nine-play, 75-yard drive capped by a 25-yard touchdown pass. Eagles quarterback Nick Foles gained just 17 yards in 94 seconds before Philadelphia had to punt it back.

That’s when Keenum threw a pick-six that changed everything:

Over the course of the regular season, Philly fans had helped the Eagles tally the best home-field scoring differential in the NFL, an average of 15.3 points. That pick-six ignited the crowd, whose energy seemed to fuel the Eagles’ aggressive defense. Their pass rush was relentless, pressuring Keenum on 48 percent of his dropbacks.

Keenum had been elite under pressure this season. But after that one critical failure, he collapsed. Before the pick-six, Keenum was 4-of-6 passing for 60 yards and a touchdown. Afterward, he completed just 57.1 percent of his 42 passes, gaining a meager average of 5.0 yards per attempt, no more touchdowns and another interception.

It seemed that Keenum was finally regressing to what he had been most of his career, not the quarterback who finished seventh in the NFL in passer rating and adjusted net yards per attempt, second in QBR and first in Football Outsiders’ Defense-adjusted Value Over Average, or DVOA.

The Vikings were also forced to abandon their run game. After tailbacks Jerick McKinnon and Latavius Murray combined for 29 yards rushing in the first two drives, they gained just 29 more all night.

On the other side of the ball, the power running of LeGarrette Blount and Jay Ajayi was the key to unlocking the vaunted Minnesota defense. The Eagles started their second drive with a 13-yard Ajayi run and finished it with a powerful 11-yard Blount touchdown run.

From that drive forward, Foles was as aggressive as he was efficient, completing a remarkable 24 of 29 passes for 335 yards, three touchdowns and no interceptions. How could he complete 82.8 percent of his passes while averaging 11.6 yards per attempt?

He played with all the poise that had suddenly abandoned Keenum.

Though Foles was pressured on 11 of 34 dropbacks, time and again he stood tall in the pocket and waited patiently for his receivers’ downfield routes to develop. His patience was rewarded. Eagles pass-catchers kept getting open off of play-action fakes and well-executed double moves, helping Foles post a nearly perfect 149.3 passer rating on throws 20-plus yards downfield. Per ESPN TruMedia, the Vikings blitzed Foles 14 times, and he burned them for an average of 12.4 yards per play.

A reminder: The Vikings finished the regular season No. 1 in scoring defense and No. 1 in yardage defense, and they were No. 1 in weighted defensive DVOA coming into this game. They were far and away the NFL’s best third-down defense, allowing conversions on just 25.2 percent of third downs — the best of any team since at least 1991. But with a Super Bowl appearance on the line, the Eagles converted 10 of their 14 third downs (71.4 percent), extending drives and keeping Minnesota’s defense on the field.

The Eagles didn’t just generate more opportunities, they finished them much better. They were perfect on field goals (1/1), red-zone efficiency (2/2) and goal-to-go conversions (1/1), while the Vikings were 0-fer on all of the above.

The end result was an every-phase dismantling perfectly reflected in the blowout final score. Per Football Outsiders’ Aaron Schatz, the Eagles’ dominance resulted in the best single-game DVOA rating (130.3 percent) since the 2015 season’s NFC title game.

The question football writers, talkers and fans everywhere will spend the next two weeks asking is whether Foles and the Eagles will be able to play anywhere near this well — especially without the help of their dog-mask-wearing fans — in Super Bowl LII against the New England Patriots.